The Funnest of Funs

You are not connected. Please login or register

I got the RPs updated and changed a few things up.

RPs have been completely reworked. Ish.

RPs are now divided into classes. Everyone has access to Class A right now. More on classes momentarily-ish.

Characters are still run the same way (except in the case of one of the Class B RPs, which will be explained-ish shortly-ish). You are free to reuse old characters (I'll leave the links for those for a month or until I'm tired of seeing them) or create new characters.

Suggesting RPs is much looser due to the new simplicity of creating RPs. Just suggest an RP in the appropriate section.

The super important part of the post is here:

Classes
This was one of my brilliant ideas for encouraging posting and creating an economy. (Or completely killing the site. We'll see what happens.) The layout is still screwing with me, but eventually it'll be easy to figure out. Anywho, on to the interesting part.

Class A - Default class. This includes the original three RPs - Fullmetal Alchemist, One Piece, and Code Geass - as well as one new one - Meia. Meia is more of a site RP, but because there is no plot, it's sort of... whatever you want.

Class B - You can't see it, but it's there. There are currently two RPs that had been in the works before the Epic Death - Hetalia and Darker than Black. If you wish to access these, you have to work for them. Specifically, you have to have over 5,ooo posts and you have to put site money in the nethervoid that is purchasing things from the site.
Note that the amount of money necessary is still undecided as I don't know how the site's economy will treat money. Will one site monies be a yen? a pound? I dunno.

Class *anything beyond that* - More posts, more money. Classes continue to go up for a while. Special events and pseudo-chuunin-exams (Anybody remember those? No? Okay.) will result in some of these opening up.

Class SSA - bonus points to those who get the reference. Anywho, SSA are horrendously difficult to unlock, but will be epic should you do so. The method of unlocking these are secret, as are what the RPs of Class SSA will be. It's like some secret club if you get in. 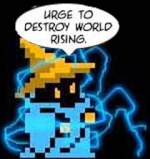 The admin thing is awesome. It's fun signing in under the administrator account and just knowing, "I have access to everything."

Just what are going to be the differences in the various classes?

Primarily just which RPs are available. You'll also get more missions and such, I believe. Depends on how well the classes work.

Ah, yes!  Encouraging!  And I like the colors, by the way!
Re: New RP Format